All megachiropterans are nocturnal with the notable exception of Pteropus samoensis (e.g. Brooke, 2001). Echolocation is, with a few exceptions (i.e. some Rousettus and perhaps Epomophorus species) unknown in the Megachiroptera, and members of the group largely depend on their large eyes specialized for night vision. Many species are sexually dimorphic. Differences between the sexes include the larger body size of males (most species), males having larger canines (many species), and males with conspicuous skin glands (a few species) (Hill & Smith, 1984; Nowak & Walker, 1994). Sexual differences are extreme in one species, H. monstrosus, in which males have very large pharangeal sacs that extend into the chest and a huge larynx (used in producing a loud "honk" that is part of a sexual display) (e.g. Bradbury, 1977).

All pteropodids are frugivorous or nectarivorous (Mickleburgh et al., 1992). Pteropodids are important pollinators and dispersers of tropical trees, many of which are adapted to attract bats and make their pollination/dispersal activities more efficient (Marshall, 1985). In some instances pteropodids may also cause significant damage to orchards. The larger species are sometimes hunted for their meat. 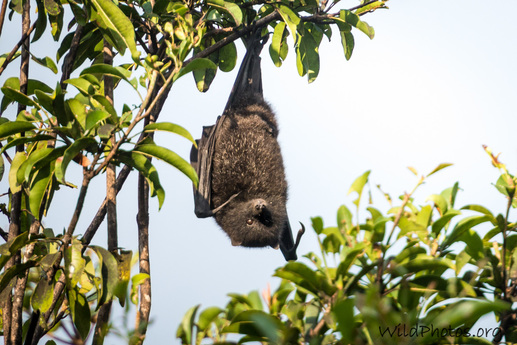 Christmas Island flying-fox, Pteropus melanotus
Megachiroptera of the genus Pteropus are the largest bats in the world, ranging in adult weight from 250 to 1000 g and have a wingspan of up to 1.7 metres. The Pteropus genus has currently 57 recognised species (Mickleburgh et al., 1992). Pteropus is primarily an island taxon, with 55 species having some or all of their distribution on islands. In this genus levels of endemism are extremely high, with 35 species confined to single islands or small island groups. Only nine species are found in continental areas (five in Asia and four in Australia), and only two (P. lylei and P. poliocephalus) are restricted to continents (Mickleburgh et al., 1992).

The distributional characteristic and dietary limitations make Pteropus populations vulnerable to agricultural clearing of forests, harvesting of animals for human consumption, and programs for culling animals on crops (Wilson & Graham, 1992 and references therein). As a result, the current conservation status of manyPteropus species is not secure. 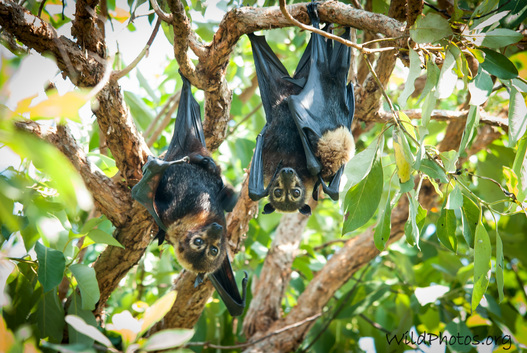 With the exception of the distribution of P. scapulatus that extends deep into Australia’s hot interior, the distributions of Australia’s mainland Pteropus species are predominantly coastal (Figure 2; Churchill, 1998; Hall & Richards, 2000; Markus, 2000). P. conspicillatus is limited to the wet tropical coast of Far North Queensland, north of Townsville to the tip of Cape York Peninsula (Hall & Richards, 2000). P. alecto’s northern distribution extends into Papua New Guinea and Indonesia (Mickleburgh et al., 1992). In Australia the range of P. alecto is approximately 1.6 million km2 (Webb & Tidemann, 1996). In the west its southern limit is currently near Carnarvon (Western Australia) (Hall & Richards, 2000); in the east it now extends as far as Melbourne (Victoria). South of Rockhampton (Queensland), P. alecto shares its range with P. poliocephalus . P. poliocephalus is endemic to the south-eastern forested areas of Australia, principally east of the Great Dividing Range. It extends as far south as Melbourne (Victoria) (Hall & Richards, 2000; Ratcliffe, 1931) where it occupies more extreme latitudes than any other megachiropteran (e.g. Mickleburgh et al., 1992; Reardon, 1999; Tidemann, 1999), and has recently established an outlying population in Adelaide (personal observations).

The majority of field-based biological research on Australian Pteropus species to date has focused on foraging patterns and its implications for seed dispersal and pollination of native forests (e.g. Eby, 1991; Palmer & Woinarski, 1999); however, very little is known about Pteropus behaviour in colonies and at feeding sites, a problem commonly encountered in this ecologically important group of animals (Mickleburgh et al., 1992; see also Wilson & Graham, 1992).